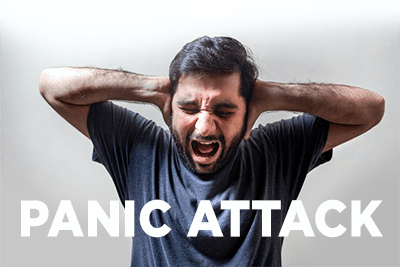 Imagine you are sitting calmly, and all of a sudden you notice your hands are shivering, you are having difficulty in breathing, are you aware what you should do in such conditions? Or what you should avoid? If not then you should go and check about this phenomena ‘Panic Attack’ because there are 60% chances that you are having a panic attack.

What are Panic Attacks? 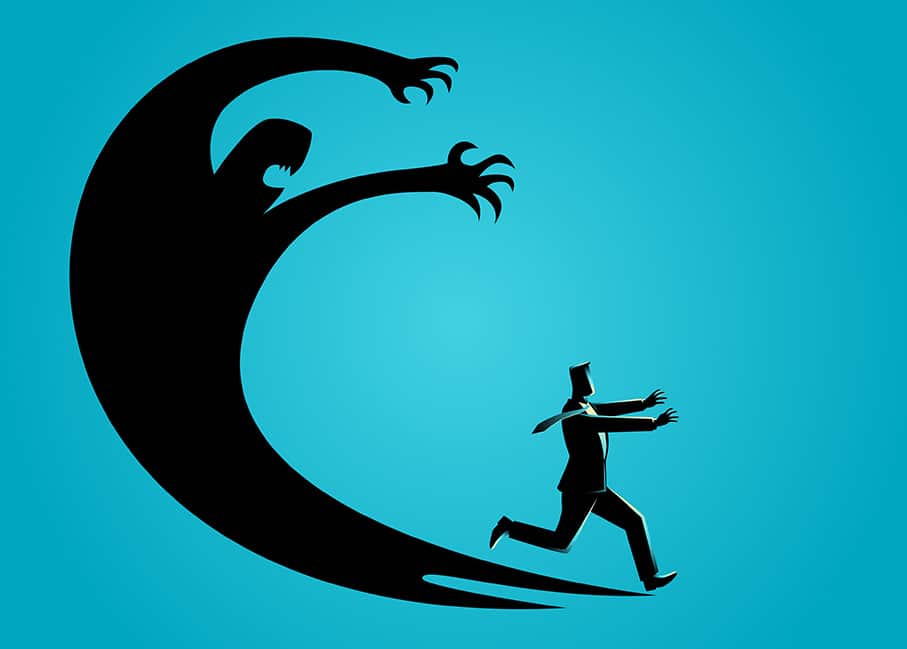 Now let us gather some basic information about Panic Attacks-
Que.– What panic attacks exactly are?
Ans. A panic attack is considered as a sudden feeling or event of intense fear that is sudden and triggers physical reactions when there is no real danger.

Panic attacks can range between a scale of very minor attacks to quite severe ones, these are accompanied by losing body control, having a heart attack, or in the worst cases death.

A panic attack is accompanied by frightening feelings, weird responses of situations which earlier were normal. Heavy sweating, difficulty in breathing, and the heavy pounding of the heart come together with these attacks.
Worrying a lot about the occurrence of another panic attack or changing your normal ways of acting are some of the reasons for developing another panic attack.

Let us now have a look at why do these panic attacks occur:

Check out our other post on OVERCOMING DEPRESSION: https://mentalcureit.com/overcoming-depression/

There can be various reasons for panic attacks depending on the mental, environmental and physical conditions of an individual,

Till today there have been no accurate causes identified, half portion of the affected population believe it to be a genetic problem, some blame overthinking for it, whereas intake of drugs like marijuana or deficiency of nutrients like zinc or magnesium can also add up to its causes.

To grab more knowledge about the causes of these attacks, you should have a look at the questions answered below –

Que.1-Why do we have a panic attack?

Ans.-There are no fixed reasons for having a panic attack whereas some of the known ones are –

A sudden feeling of stress and trauma due to the occurrence of a highly unexpected event like the demise of a closed person, divorce, etc. Increases the chances of these attacks. Smoking, caffeine, and genes too can be a reason.

Que.2-Can you have panic attacks for no reason?

Ans.– A continuously working brain is prone to have a risk of panic attacks as a high amount of brain activities lead to the high secretion of various unexpected hormones. As stated above, genes play a vital role in the occurrence of panic attacks.

Que.3-What are the causes of panic attacks in children?

Ans.-The causes of panic attacks for children are so far the same as adults, but in their case, the reason for stress will be a school assignment, parents-teacher meetings, fear of exam, pressure of result, etc. Lack of communication or we can say bonding with parents or other closed ones can also be the cause.

Que.4-What are the causes of breathing difficulties of panic attacks?

Ans.-When we undergo a panic attack, the flow of stress hormones goes high increasing the breathing rate which results in breathing difficulty.

Que.5-Why do panic attacks occur when we are asleep?

Ans.-It is known that our brain keeps on working even when we are asleep, so it can start focusing on some pending worries or anxieties leading to an unconscious panic attack.

Ans.-No consumption of antibiotics does not cause panic attacks, however, it can cause anxiety-like symptoms as well as anger, restlessness, etc.

Ans.-It is believed and proved that smokers have a high tendency of experiencing panic attacks than non-smokers as the cigarette smoke contains carbon monoxide which forces the person’s body to think it is having suffocation which increases heartbeat and panic attacks.

Ans.-The symptoms of panic attacks are somewhere similar to those of heart attacks but it is not yet proved that panic attacks can result in heart attacks, although people facing heart diseases are likely to have some panic disorders.

Symptoms of a panic attack – 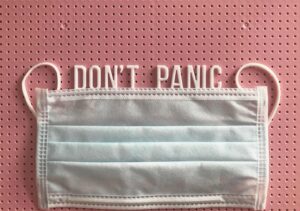 The symptoms of panic attacks vary from person to person and are severe in some cases whereas mild in others. We can classify these symptoms as both physical and mental ones.

Physical symptoms during a panic attack are –

In case you need more specific information regarding ‘what and how’ of these symptoms, just go below and have a tour of various questions –

Que.1-What is the basic symptom of a panic attack and its natural depressant?

Ans- The basic symptoms of panic attacks are –

Que.2-How do I stop thinking about the physical symptoms of panic attacks?

Ans.- Panic attacks is just a game of mind and body, a sound mind will never go through any kind of attacks. To prevent panic attacks, the first thing you should do is to consult a therapist and start doing meditation.

Que.3-Can nausea be a symptom of panic attacks?

Ans.- Yes nausea can be a symptom of panic attacks due to the disruption caused in digestive enzymes by various adrenaline rushes and rushes.

Que.4- Can you observe symptoms of panic attacks after doing a heavy aerobic workout (if you are not used to it)?

Ans.-Sudden intense aerobic workout is not good for your body as you are not used to it and it can cause many problems like aches, heavy breathing, etc. which are symptoms of panic attacks but the difference is that these symptoms are not severe and can be controlled by taking a break from the exercise.

Que.5-What are the physiological symptoms of panic attacks?

Ans.- Panic attacks have a wide of physiological symptoms including –

Que.6- Are panic attacks a symptom of PTSD?

Ans.-Intense fear, shortness of breath, etc., are all symptoms of  Post – Traumatic Stress Disorder(PTSD), and all these symptoms occur when you have a panic attack.

So it can be said that panic attacks are a symptom of PTSD but in some cases, panic attacks occur without having a traumatic history of any event

Que.7-What are the early signs of a panic attack?

How can we recognize that a panic attack is on its way?

Ans.-To check whether a panic attack is on its way or not, you should the following symptoms –

Que.8-How to prevent a panic attack at its early stage of occurrence?

Ans.- As and when you get the feeling that a panic attack is on its way the first thing you should do is try to calm your mind by taking deep breaths.

Then start diverting yourself from the fear of dividing into the panic attack on the positive sides of your life.

These are the basic and easy steps you should follow to save yourself from a panic attack in the beginning.

Que.9-Can you have symptoms of panic attacks that are different from others?

Ans.-Yes, panic attacks can have different symptoms for different people as everyone have their problems which can turn out to be a reason for these attacks occur.

Some people can have only sweating and dry eyes, whereas some can undergo breathing difficulties etc.

Que.10-How can a person know whether he is suffering from a panic attack or a heart attack?

Ans.- Sometimes a panic attack makes the person think they are suffering from a heart attack as the symptoms are quite similar but there are still some tiny symptoms that can help you to differentiate between the two attacks –

In panic attacks, the chest pain is in a particular area (localized), whereas in a heart attack the pain occurs in the middle of the chest and then passes towards other body parts.

In panic attacks, pain occurs for a while and then starts diminishing whereas in the case of a heart attack the level of pain keeps on increasing.

In case of a panic attack, there will be no sign of heart problems but in case of a heart attack medical tests will show an increased amount of protein in the blood as in this case protein is released to the blood-stream due to the destruction of cardiac cells.

Many times you might have heard people talking about anxiety and panic attacks as if they are both the same things, this is completely a mistake.

So lets clear your doubts and make you aware of –

Difference between anxiety and panic attacks –

When it comes to panic attacks, a lot of many questions come to our mind, so here we have tried to answer some more of them – 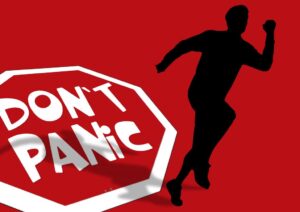 Que.1- How to deal with a panic attack?

Ans.- Panic attacks are easy to deal with, all you need is to –

Que.2-Can you die from a panic attack?

Ans.-No, you will not die from a panic attack but its symptoms will make you feel like you are about to collapse like shortness of breath, pain in the chest, etc.

All you should do is to calm yourself and in worst cases opt for proper medications and take the guidance of a physician.

So this was all about panic attacks and all the related information you should know about.

Hope you will find the answer you are looking for and in case not, then do comment and tell us your unanswered questions. We’ll help you in any way possible.😊😊

Cardiovascular Fitness Exercises, Does it Helps in Weight Loss?